Who da thunk it?

I've never been interested in making knitted or crocheted toys. Never really got the appeal of amigurumi, either. Or maybe, especially.

But yesterday, the younger son and I were looking at LOLcats and there was an ad on the site that featured an amigurumi octopus. Well, they said it was a squid, but it only had four legs, so who knows what it was. My son says, "Hey, look at that cute octopus! I want one!" and I said (foolishly), "I could make one of those." He replied, "Today? Can you do it today?" Well, then I was in over my head. I searched the toy patterns on Ravelry and found this one. I had some Cascade 220 Superwash around from an aborted sweater design last year.

A few hours of tight crocheting later, it's done.

Notes: Pretty simple little project for anyone who can do single crochet. Hard on your wrists to work so tightly if you're prone to carpal tunnel troubles.
Posted by Elizabeth at Tuesday, April 27, 2010 4 comments: 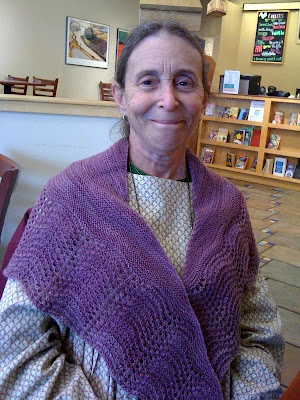 That thing from the last post is growing and doesn't look so much like a boomerang any more. It's a Multnomah Shawlette, with one modification. I'm making more repeats of the feather and fan part than the pattern specifies, to make it more like a shawl and less like a scarf.

I can't decide how hard to block this once I get it off the needles. I'm thinking not as vigorously as I would block lace that's all based on stockinette stitch.

This is a quick and fun little knit. I'm embarrassed to admit that I did need to restart the feather and fan section after I was about 4 repeats in. The second time through, my hands and brain were working together and I became able to do it on autopilot.
Posted by Elizabeth at Tuesday, April 20, 2010 4 comments:

I finished these socks last night, though I still need to darn in ends and give them a little wash. It's a simple twisted rib stitch on the leg and top of foot. I think there are patterns out there for the same thing, though I didn't use one. The yarn is Turtle Feet by Turtle Cove Farm. I really enjoyed working with it. Nice saturated color and a pleasingly dense fabric on US #1 needles.

This morning I cast on for this thing. No, it's not a boomerang. I think I'll be giving it away when I finish it, as I know a person who it will suit perfectly. Stay tuned.

Out in the yard, lots of stuff is in bloom!

I want to know why "pansy" was an old-time insult for a man who was considered weak. These pansies apparently overwintered in Wisconsin! These are tough flowers! They might be the toughest annuals around. Don't be messin' with pansies.

All we can think of is that we had an early and thick snow cover that stayed there all winter, thus protecting them from a deep freeze. Our soil seems to have warmed up much earlier this year than it has in many previous years, so I think it never froze as deep or hard as it would in a typical winter, even though our temperatures were fairly typical.

Mr. SABLE is off in Phoenix this week. The boys and I are doing ok so far, but it's only been one day.
Posted by Elizabeth at Monday, April 12, 2010 7 comments: