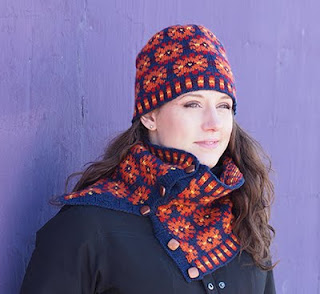 The Facebook era has certainly been brutal on the garden variety blog. I am as guilty as anyone.

But with the cooler weather starting to work in to my part of the country, I've suddenly got the energy to try to gear up my online presence. To that end, I'm working on a major update for my poor neglected website and planning to get all my downloadable patterns available there.

Meanwhile, since winter is coming, here's a nice pattern that you might want to knit to be ready for it. Details on Ravelry! Or buy the pattern for the hat and cowl now!

This morning I closed comments on the previous post. There were 98 comments. I used a random number generator online to pick a number from 1 through 98. The winner was 23, which was posted by gs-elf. Please send me your mailing address! elizabethmorriso (AT) gmail (DOT) com! I'll put your copy of Sock Yarn Studio in the mail as soon as I get it. 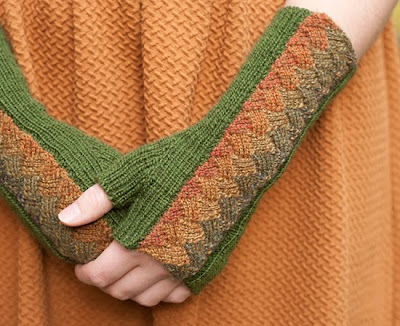 In January, 2011, I got an message from Carol Sulcoski asking me if I wanted to contribute something to a book she was putting together. I was just starting work on my Tenney Park design, which was eventually published in Knitty™. At that point, though, it kind of fit her general description of projects for the new book: featured a sock yarn, not a sock. So, I made a little proposal package out of my preliminary sketches and sent it off to her. Carol said she liked the idea, but it was a little more than she planned for the scope of this book. Would I, maybe, put entrelac on something else? Like fingerless mitts? Well, sure, I thought. No problem. So I made another proposal with a sketch and a few vague details.

Carol said yes and we ironed out yarn choices. Before too long, I got a little bundle in the mail from Crystal Palace and it was time to start knitting. This was a very fun little knit. The only disappointment for me was that my hands are bigger than most men's hands, so I was unable to try on the sample pair as I worked. In Sock Yarn Studio, the Thornapple Mitts are in the 2-skein section. This is only because of needing two different yarns to get the effect. You should be able to get two pairs of mitts out of one each of the Mini Solid and Sausalito, and you'll still have more Sausalito to make more entrelac panels!

For a lot of years, I didn't want anything to do with entrelac. It seemed like a lot of fiddly fussing for dubious rewards. So often, it seemed, that when designers got into entrelac they really got into it, if you know what I mean. But I had to admit that I liked the way it could be used with yarns that featured long color changes. I wondered if I might like it better if it was used in a more restrained way. That was what led me to my Tenney Park sweater and also to the Thornapple Mitts.

One thing that really helped me embrace entrelac was learning how to knit backwards, that is, to work from left to right across the row, right-side facing, so I didn't need to constantly be turning to purl. If you you are reasonably comfortable with seeing the structure of knitted fabric, it isn't hard to work out the process, and then it's only a matter of practicing enough to develop the muscle-memory. For those who need some guidance, there are many tutorials online. Here's one from Knitty.com. Knitting backward is also handy for making bobbles or just any knitting that involves a lot of turning from right to wrong side of the fabric and back again.

So, about the give-away... leave a comment on this post. On November 4, I'll do a random selection and pick one of the commenters to get a free copy of Sock Yarn Studio. The rest of you can order one from Amazon or Barnes and Noble or even go to a bricks'n'mortar store near you and buy it in person! Be sure to catch the rest of the Blog Book-Tour, too!

When I started this blog, I sometimes posted twice in a day. Then it was a few times a week, then a few times a month, and now, it appears, I've gone about a year. Facebook has really taken away my impulse to blog, for the most part. But, now I have news!

First off, I have a pattern in the upcoming book by Carol Sulcoski, Sock Yarn Studio. Carol says the book will be out on October 2, but Amazon will let you pre-order it now. I haven't seen the other patterns, but mine is super cute and fun (she says modestly). When I get some official pictures to share, I will. There are lots of Very Famous Designers in the book, so I'll be rubbing up against the major leaguers. Stay tuned for more details on that.

Next on the newsworthy list is that I have a new pattern available. The Spring Harbor Cowl is a quick, fun, one-skein knit. I used Black Bunny Fibers Cashmerino DK in the colorway Plum Damask. The base yarn is 80% merino, 10% cashmere, and 10% nylon. It's wonderfully soft, even against sensitive neck skin. Make a few cowls now and be ready for gift-giving in December.
Spring Harbor Cowl Pattern $3 US.

Instant download through Ravelry. You do not need to be a Ravelry member to purchase.
Posted by Elizabeth at Wednesday, September 05, 2012 3 comments:

My new pattern Tenney Park is now available in the Deep Fall issue of Knitty! Enjoy.

What I Did on My Summer Vacation

Oh my. So much time with so little posting.

I went to my annual Alt Knitting Camp with my regulars at Devils Lake State Park. While there, I started knitting a basic top-down raglan for myself so that I'd have something relatively mindless to work on. It's dark brown, from Jo Sharp Classic DK. It's the kind of sweater that doesn't look all that great on the needles, but I will probably wear all winter long.

We had visits from my parents in May, Scott's brother in July, and my sister and niece in August. Here is the younger son with his cousin:

I spun a bunch of 3 ply yarn. I'm not exactly sure what it will be good for, but it was fun spinning.

I sewed a one strap back pack and then I sewed a two-strap backpack. The pictures of the two-strap one, which I sent off in a swap, seem to have been deleted from the camera card without being saved to the computer. D'oh!


I took my younger son to the city pool a couple of times and to Devils Lake several times.

I spent most of July hiding out indoors, in the air conditioning. I spent too much time on Facebook.


I took my kids to the Shedd Aquarium in Chicago to see the Jellies.

Then we went to Millennium Park to see the Bean.

I don't know of any other sculpture that seems to invite so much public interaction.

On the way back to the car, I saw a Maserati parked near the school of the Art Institute.

I guess art students have more money now than they did in the old days.

I finished a sweater for publication and it'll be appearing this fall. Had to do pictures twice. Also knit something smaller for an upcoming book, but I'm not sure when that will be public.

I've been thinking about sewing, about weaving, about spinning, and not as much about what to knit next. But now school has started and I can finally get my brain focused on my stuff, I hope that will change. There's a creative zone I seem to be most able to tap into when I know I won't be intruded on for at least 4 hours. I wonder what will happen next?

Several weeks ago I got an email from Robin Hunter to contribute an interview for her blog How to Become a Professional Knitter. My interview is up today. Take a look.
Posted by Elizabeth at Friday, September 02, 2011 2 comments:

Email ThisBlogThis!Share to TwitterShare to FacebookShare to Pinterest
Labels: self-promotion

So much for my determination to be a more consistent blogger.

I've had a few irons in the fire, so some of my knitting and other projects are not yet for the public. Stay tuned for those updates as they become public.

Meanwhile, I have a short prose piece in the new issue of Entangled magazine. Entangled is a new online magazine published by New Zealand knitter/fiberista/pod-caster Genny Stevens, a.k.a. GrannyG. Entangled is about all phases of fiber production, crafting, and artistry. It doesn't feature patterns per se, though some patterns are occasionally published as part of an article. The content is not free, but the price is reasonable for the excellent content. Check it out! I'm planning to have a longer article with photos in the next issue, that is, if summer ends and I find myself once again able to string together a paragraph or two with some semblance of coherence.
Posted by Elizabeth at Monday, August 08, 2011 4 comments: